Hunger - "Living in the hollow of plenty"

“Starvation is death by deprivation; the absence of one of the essential elements of life. It’s not the result of an accident or a spasm of violence, the ravages of diseases or the inevitable decay of old age. It occurs because people are forced to live in the hollow of plenty. For decades, the world has grown enough food to nourish everyone adequately. Satellites can spot budding crop failures; shortages can be avoided. In the modern world, like never before, famine is by and large preventable. When it occurs, it represents civilization’s collective failure.”

R. Thurow and S. Kilman (2009) Enough: Why the Poorest Starve in an Age of Plenty

Prevalance of undernutrition in total population < 5%

16 million people (or 1.4% of total population) in the Developed World are estimated to be undernourished (down from some 20 million in 1990-92). Groups who are particularly ‘at risk’ include older people, the long-term unemployed and those accessing food aid programmes - countries which have witnessed significant increases in the latter group in recent years include Iceland, Italy, Spain and Hungary

The recent financial and economic crisis that erupted in the US in 2008 has led to a significant increase in hunger there, according to the latest government report in September 2011. In 2010, 17.2 million households (14.5% of total) were ‘food insecure’, the highest number ever recorded in the United States and estimates suggest that about one-third of food-insecure households had ‘very low food security’. In 2010, children were ‘food insecure’ at times during the year in 9.8% of households with children; in 1% of households with children, one or more children experienced the most severe food-insecurity measured by the US Government.

In very many developed countries, obesity has become a major issue and a prominent health challenge.

Prevalance of undernutrition in total population between 5% and 9%

Countries included in this category include Brazil, Venezuela, Nigeria and Tukmenistan, all of which have experienced significant reductions in levels of hunger since 1990. Sustained focus on the issue of hunger in Brazil and Nigeria has resulted in very significant reductions in the numbers of people hungry; in the case of Brazil, there has been a reduction of 53.7% in the proportion of the population while in Nigeria, the equivalent figure is 56%. The 2012 UNFAO State of World Food Insecurity Report notes that the number of people experiencing undernutrition declined from 19 million in 1990-92 to 14 million in 2010-12.

With reference to Brazil, Oxfam has commented:

‘Brazil’s successes in reducing poverty and increasing food security have notably outstripped those of India and China, despite the fact that economic growth in India and China has been faster. Brazil’s achievements in hunger and poverty reduction are widely considered to be the results of pro-poor policies introduced during the presidency of Luiz Inácio Lula da Silva, including Fome Zero (Zero Hunger), a national cross-sectoral strategy which was launched in 2003’.

Prevalance of undernutrition in total population between 10% and 19% 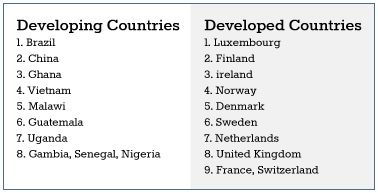 In 2009, the NGO Action Aid listed its top 10 countries in both the Developing and Developed World for their strategies to fight hunger

Prevalance of undernutrition in total population between 20% and 34%

Countries with a percentage of population between 20% and 34% who are undernourished currently includes India, Yemen, Sudan, Kenya, Tanzania and Laos. Of particular interest in this category is the case of India which has been criticised for its relative failure to reduce undernutrition when compared with, for example Brazil despite its overall wealth. Between 1990-92 and 2010-12, the absolute number of those undernourished declined by 23 million or 9% while the proportion of the total population who were undernourished declined from 26.9% to 17.5%, a decline of 34.9%.

Other countries in this category with contrasting histories include Sudan which has seen the proportion of undernourished in the total population decline to 39.4% and Kenya (down to 30.4%) while Tanzania and Yemen have seen the numbers increase to 38.8% and 32.4% respectively.

Prevalance of undernutrition in total population greater than 34%

Countries in this category display the highest levels of undernutrition worldwide; Zambia, Mozambique, Chad, Sierra Leone, the Democratic Republic of Congo and the Central African Republic are included; all have percentages of total population who are undernourished above 34% and some have experienced significant increases in recent years. For example, the absolute number of undernourished in Zambia has increased by 131% since 1990-92 (and the proportion of total population has increased from 34% to 47%, an increase of 38%. Similarly, Burundi has seen its absolute numbers increase by 124% to 6 million and the percentage of total population has increased by 50% from 49.8% to 73%.

Overall, in terms of the world’s Least Developed Countries, the absolute number of those undernourished has increased from 201 million to 260 million (+29.5%) while the proportion of total population who are undernourished has declined from 37.9% to 30.6% (-19.3%).

"…A situation that exists when people lack secure access to sufficient amounts of safe and nutritious food for normal growth and development and an active and healthy life."

Hunger: defined by the UN Food and Agriculture Organisation as consumption of fewer than 1800 kilocalories a day; the minimum most people require to be healthy and productive. The vast majority of the nearly 1 billion hungry people worldwide suffer from Chronic Hunger caused by constant and ongoing lack of both sufficient quality and quantity of food. Intergenerational hunger (where groups of people suffer ongoing hunger across generations) has huge long-term consequences.

Undernutrition signifies deficiencies in energy, protein, essential vitamins and minerals; it is the result of inadequate intake of food, in terms of either quantity or quality, or poor utilisation of nutrients due to infections or other illnesses or both. Severe undernutrition can be referred to as Acute Hunger and is associated with 35% of all under five mortalities (over 3 million deaths per year).

Food security refers to availability, access, utilisation and stability and exists when all people have ongoing physical, social and economic access to sufficient, safe and nutritious food which meets their dietary needs and food preferences.

Malnutrition refers to both undernutrition (problems of deficiencies) and overnutrition (problems of unbalanced diets, such as consumption of too many calories with low intake of micronutrient-rich foods, e.g. green vegetables). This type of hunger can also be referred to as Hidden Hunger and includes almost two billion people worldwide, including many people in the ‘developed’ world. In recent years, there has been a move to include obesity as a third form of malnutrition.

Recommended daily calorie intake varies from person to person, but agreed international guidelines suggest that, on average men need about 2,700 calories and women about 2,000 calories per day. These figures can change depending on age, height, weight and activity levels. On average, a person needs about 1,800 calories per day as a minimum energy intake.

Who are the hungry?

According to the UN Special Rapporteur on the Right to Food Professor Olivier De Shutter (2010) there are four broad categories of people who make up the worlds’ hungry:

Small landholders who depend on less than 1.5 hectares of land for their livelihood; made up of nearly 500 million people (the majority being women) who produce food for themselves and their families usually in remote rural areas. When their harvests run out, they often have little to eat and lack the financial means to buy sufficient or adequate food.

Agricultural labourers - of the 450 million such labourers in the world nearly 200 million are hungry. Many of them work on large plantations and are employed on a seasonal basis often without a contract or any legal or social protection.

Artisan farmers comprised mostly of indigenous peoples, who do not own land or are in waged employment. They depend on artisan fishing, raising livestock and the products of the forest. This group comprises approximately 10% to 15% of the world’s hungry.

The Urban Poor - a rapidly expanding group with the percentage of urban residents in sub-Saharan Africa alone expected to rise from 30% to 47% by 2020. Access to food in urban areas depends almost entirely on cash purchases which pose serious problems for those who lack a fixed income. Although a wider variety of food is available, the food consumed in urban areas is not necessarily of superior nutritional quality.

Who are the hungry?

In 2012, the UN Food and Agriculture Organisation produced its State of Food Insecurity in the World which summarised the current situation following a major review of how undernutrition is understood and measured.

The 2012 estimate is that 870 million people were undernourished equal to 12.5% of total world population (1 in every 8) with the vast majority occurring in Developing Countries (852 million, slightly less than 15% of population there). The revision undertaken for the 2012 report suggests that progress in reducing world hunger was more pronounced than previously believed. Declines in the number of people undernourished since 1990-1992 have been significant - down by 38% in Sub-Saharan Africa and by 24% in Asia but the proportion of undernourished in the total population remains very high (27% and 14% respectively).

However, most of the progress reported was achieved before 2007–08 with progress slowing down and levelling off after that. The new, revised estimates imply that the Millennium Development Goal (MDG) target of halving the prevalence of undernourishment in the developing world by 2015 is within reach but only if action is taken to reverse the slowdown since 2007–08.

Some causes of Hunger

Low agricultural productivity: Nearly half the world’s hungry (400 million people) live on small farms that do not produce enough food for their families or for an adequate income. International aid to agriculture has declined from 17% of all aid in 1982 to 3.7% in 2006; when coupled with a shift in support to growing cash crops for export this has meant that poor farmers have not had sufficient access to productive resources (seeds, tools, fertilisers etc.) or secure access to land.

Poverty is the root of human underdevelopment and also a result of it; many of the world’s poor are simply unable to afford sufficient food or food of the required quality, their diets tend to be based on starchy foods, such as rice and bread, with few fruits and vegetables or animal products leading to low calorie intake and micronutrient deficiencies. This particularly affects children under the age of two years leading to wasting, stunting and poor brain development, conditions that can never be reversed.

Gender Inequality: More than 60% of the chronically hungry people in the world are women who continue to experience inequality and discrimination.

Conflict and Poor Governance: no country with a strong democracy has ever suffered from famine while many nations with the highest levels of hunger are gripped by violent conflicts or civil wars. Conflict restricts sowing and harvesting; armed groups often use hunger as a weapon by cutting off food supplies, destroying crops and hijacking relief aid.

Unjust Trade Regimes: The terms of international trade are for the most part stacked against poor and developing countries. Currently, the poor cannot afford the price of food and are unable to effectively sell their produce on the market.

Climate Change and Natural Disasters: The worst affected hunger hotspots are to be found in regions of climatic extremes; areas which experience drought, flooding, unpredictable precipitation patterns, soil erosion and desertification (increasingly as a result of climate change).

Falling Remittances: Worldwide, nearly $300 billion was sent in remittances to developing countries in 2007 from relatives living outside their native country but with the global financial crises many of these remittances have now dried up leaving family ‘back home’ even more vulnerable to poverty and hunger.

Some causes of hunger...